ISO 9001:2008 Certificate of Registration for the design, manufacture and distribution of industrial valves and strainers.

Below is a description of the International Organization of Standardization. 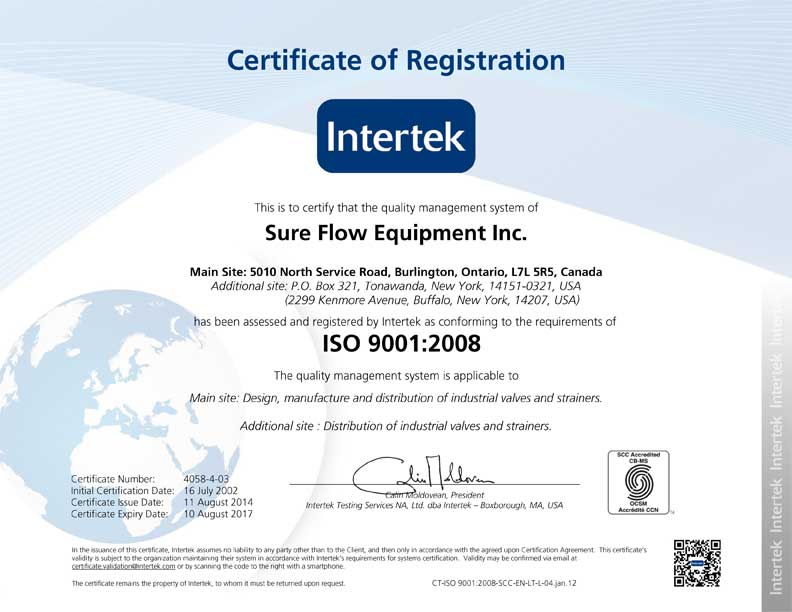 ISO is a network of the national standards institutes of 147 countries, on the basis of one member per country, with a Central Secretariat in Geneva, Switzerland, that coordinates the system.

ISO is a non-governmental organization: its members are not, as is the case in the United Nations system, delegations of national governments. Nevertheless, ISO occupies a special position between the public and private sectors. This is because, on the one hand, many of its member institutes are part of the governmental structure of their countries, or are mandated by their government. On the other hand, other members have their roots uniquely in the private sector, having been set up by national partnerships of industry associations.

Therefore, ISO is able to act as a bridging organization in which a consensus can be reached on solutions that meet both the requirements of business and the broader needs of society, such as the needs of stakeholder groups like consumers and users.

Because “International Organization for Standardization” would have different abbreviations in different languages (“IOS” in English, “OIN” in French for Organisation internationale de normalisation), it was decided at the outset to use a word derived from the Greek isos, meaning “equal”. Therefore, whatever the country, whatever the language, the short form of the organization’s name is always ISO.

How it all started

International standardization began in the electrotechnical field: the International Electrotechnical Commission (IEC) was established in 1906. Pioneering work in other fields was carried out by the International Federation of the National Standardizing Associations (ISA), which was set up in 1926. The emphasis within ISA was laid heavily on mechanical engineering. ISA’s activities came to an end in 1942.

In 1946, delegates from 25 countries met in London and decided to create a new international organization, of which the object would be “to facilitate the international coordination and unification of industrial standards”. The new organization, ISO, officially began operations on 23 February 1947.

When the large majority of products or services in a particular business or industry sector conform to International Standards, a state of industry-wide standardization can be said to exist. This is achieved through consensus agreements between national delegations representing all the economic stakeholders concerned – suppliers, users, government regulators and other interest groups, such as consumers. They agree on specifications and criteria to be applied consistently in the classification of materials, in the manufacture and supply of products, in testing and analysis, in terminology and in the provision of services. In this way, International Standards provide a reference framework, or a common technological language, between suppliers and their customers – which facilitates trade and the transfer of technology.